As part of another project, I came across the problem of correctly counting the number of syllables in English words. After searching around and seeing mostly rule- and dictionary-based methods, I ended up building such a syllable counter from scratch, which ultimately led to the construction of a neural network model that achieved a 96.89% validation accuracy on this task. Here I’ll go through the journey that ended up with that final product.

The first question, as always, is getting hold of a dataset. I considered both the CMU phoneme dataset and the Gutenberg Moby Hyphenator II dataset, the former containing the phonemes for ~130k English words and the latter containing the hyphenation of ~170k English words. Even though phonemes might make it easier for a model to find the correct number of syllables I opted for the larger Gutenberg dataset. Quantity over quality.

The Gutenberg corpus consists of English words in which the hyphenation points are marked with the Yen symbol (¥) if you decode the file using the latin-1 encoding. Several lines have multiple words, separated by spaces.

One thing that I found amusing is that the number of syllables in the corpus roughly follows a binomial distribution: 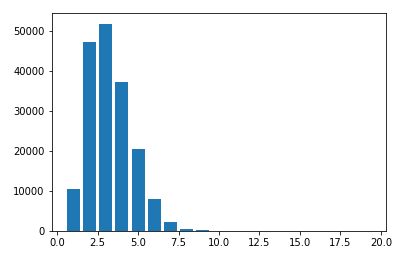 The first task was then to convert these strings to a dataset more appropriate for my needs. I started by pulling out my vocabulary by separating the lines by spaces, and by summing up all the non-letter symbols (and add 1) I could get the syllable counts. So far so good! My naive first attempt was then to use the (cleaned) words and syllable counts and simply interpret the task as a regression task that can be optimised with the mean squared loss. This did not work well, which can be due to a couple of different factors:

These points made me change the task from a regression problem to a sequence-to-sequence task, in which we convert a sequence of characters to a sequence of probabilities of the same length, where the probability indicates how likely it is that the given character starts a new syllable. Since the input- and output sequences have the same length we don’t have to deal with an encoder-decoder framework and can simply use a recurrent cell as-is.

With the preprocessing of the target labels complete, the remaining part of the preprocessing is standard: we need to split the words into sequences of characters, convert the characters to integers and then pad these sequences such that all sequences in a given batch have the same length. This can be done quite easily with the torchtext library:

Notable here is the BucketIterator object, which sorts the dataset by the length of the words and then puts words of similar lengths into the same batches, to minimise the padding needed per batch. Therefore we don’t need to worry about padding every character sequence to the length of the longest word.

The BatchWrapper class at the end of the function above is a very simple class that outputs only the word and the binary syllable sequence. The reason why I even included the syls field to start with was because I use it when I’m splitting the dataset into training- and validation sets above, as I’m splitting it in a stratified fashion. This will result in a validation set with the same binomial-like syllable distribution as we saw above.

Now, with the preprocessing all done, it’s time to build a model! As we’re mapping a sequence of length $n$ to a sequence of length $n$, a simple recurrent neural network should be able to do that job. I was playing around with attention mechanisms as well, both as an addition to the network as well as a replacement for the recurrent cells, but both resulted in poorer performance. This might just be due to these mechanisms being mostly suited for encoder-decoder frameworks, in which the lengths of the input sequence and output sequence differ.

After trying out a bunch of different things, here is the (quite simple!) architecture that turned out to work the best for me: 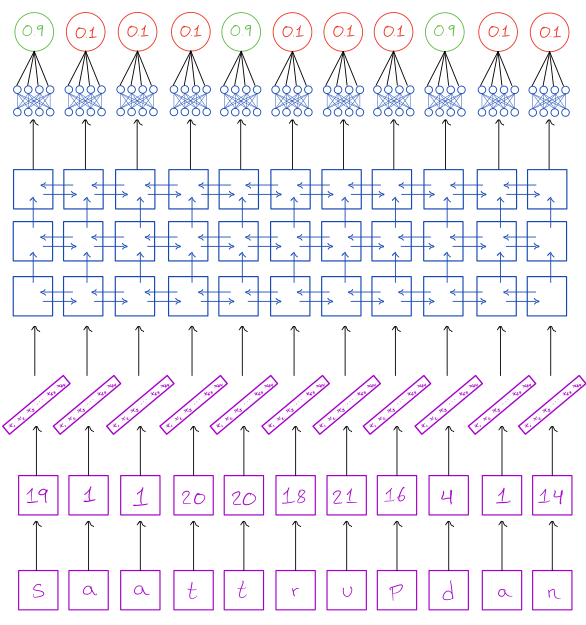 Concretely, this converts the characters into 64-dimensional vectors, processes them in three bi-directional GRU layers with 2x128 = 256 hidden units, followed by a time-distributed fully connected layer with 256 units, and finally every 256-dimensional vector is projected down to a single dimension, yielding our logits, to which we apply a sigmoid function at every timestep.

This model has 810,369 trainable parameters, which doesn’t seem completely out of proportions as we’re dealing with ~170k words in our training set, each of which has ~4 characters on average, amounting to ~680k character inputs.

As for regularisation I went with the following:

In terms of loss functions I could just use binary cross entropy, but the problem with that is that then I won’t really be evaluating the entire word but only the individual characters locally. As we’re ultimately interested in a syllable count we need to ensure that the output numbers depend on each other. After testing a few different ones, I ended up choosing the average of the binary cross entropy and the root mean squared error:

Converting the output to syllables

After tuning the hyperparameters, the best model achieved a 96.89% validation accuracy and a 97.53% training accuracy.

Here are some of the words that the model counted wrongly:

For some of these words I seem to agree more with the model’s predictions over the true labels (e.g. init, glacing, collegiate, prayerfulness) and some of the words seem very rare (what’s a bandaranaike, xtacihuatl or appoggiaturas?). Overall, I’m quite satisfied with the final result!

Again, you can check out all the code here, and the model and the datasets can be downloaded here. Thanks for reading along!